The Federation of Small Businesses

The Death of the Office?

“Rumours of my demise have been greatly exaggerated,” the famous line uttered by author Mark Twain after reports of his death – incorrectly as it turned out – emerged in newspapers.

And last year, with the lockdown in full swing, and many office businesses asking staff to work remotely, the same cry was levelled at the office.

And the charge went further in some quarters, with death knells sounding for large metropolitan cities like Manchester, London, Leeds, and Birmingham, whose hustling centres with their trendy coffee shops, patisseries, bars and restaurants, all serviced by a myriad of office workers from early doors to the last commute home, faced an existential crisis triggered by the mass change in working patterns and habits – predominantly working from home.

It stands to reason, if you’re working remotely there’s no daily purchase of your breakfast latte, the croissant, the elevenses snack, the lunchtime sandwich or sushi tray, the business lunch, that drink after work with colleagues. The death of the office – were that to be the case – would have a devastating ripple effect right across wider daytime and evening economies, and create massive funding problems for public transport systems from bus to tram to tube whose financials are all based on peak occupancy travel.

And so the house of cards collapses.

Yet fast forward to the here and now, it’s not been as cataclysmic as some of the naysayers were predicting, and there is optimism that while things will change, it won’t necessarily be the end of the world as we know it. 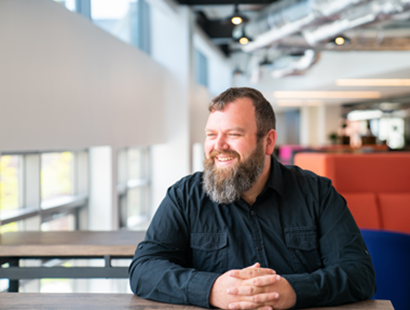 “I’d heard about Covid before Christmas, but it probably wasn’t until late January or early February that I started to take it more seriously,” he said. “It couldn’t really have come at a worst time if I am honest, but hindsight is a great thing, and in fairness we did act extremely quickly. By the time staff started voicing their concerns about coming in we were already quite advanced in our plans for remote working, partly because it was something already in our culture as a business.”

Despite the investment in the new office, whose refurb was then still not fully complete, Nick had everyone working from home a week before the actual lockdown was announced.

But Nick is one of life’s true entrepreneurs, and his business from the outset in 2003 has been based on clever second guessing of what the future held, in that case the future of ‘digital’ and how rapidly the growth for interactive, integrated websites would grow exponentially.

He started the agency while he was still an undergraduate at Salford University in 2003, where he was reading for a degree in computer science and information systems. By the time he graduated the business already had two clients each paying him a salary for just one day a week’s work thanks to digitised automation processes he’d created.

It wasn’t long though before he was up to 12 staff and had need for proper office space. From there it went quickly as the digital tech explosion happened, with Manchester in the thick of it as a UK hub. Says Nick: “We moved to a new office from Dale Street, down to Blackfriars on Deansgate, then we quickly went to about 30 people in just a year. We had this vision of what digital would like in 10 years’ time, it was a massive leap of faith but we invested in it and it paid off.”

Jump to the present day: it’s May, and CTI Digital – like many businesses across the UK – are now starting to emerge from the country’s enforced Covid-19 hibernation. And across the country, in every major town and city, the same question is being asked by decision makers in local government and business leaders: “Has the office had its day”?

“Most definitely not!” Nicks tells me confidently. “This is just an evolutionary jump – the next phase. We actually see it as an opportunity to do more with our office space, and at the same time allowing our staff to have more say over their working day. It’s a win-win for us.”

“Studies show happy staff stay with companies longer, they’re more productive, and they have more control over their lives which is great for their mental health. We know our staff our loyal, every day they are headhunted but chose to remain with us. That loyalty will grow.

“So while we don’t see the need for a 210 seater office anymore, the plan is to repurpose some of the space left over and be more creative with what we have, make it a better place to be and a nicer place to spend time when they chose to come in.”

As I look around Nick’s sprawling office empire I can see the job’s already underway. Think Google – think trendy work pods, pool tables, proper coffee machines, a TV room with a games console, banks of curved work stations, an auditorium style presentation space.  This is the kid office you aspire to work from – if you had a choice!

“The key thing for me is getting the right balance,” Nick adds. “We’ve always known ‘hybrid’ works, but with the pandemic going from two or three days a week from home to five was a big jump, and it doesn’t work for everyone. A lot depended on their personal circumstances, and we learn from that.

“It’s been tough with screen fatigue, you can now use Zoom, Microsoft Teams – we’ve actually used Google Hangouts for quite a long time – but staring at your screen all day, that’s really hard.

“We’ve done a staff survey and we know around 30% of the workforce want to come back in – the office works for them. Then there’s 30% who want the hybrid – I’m in that camp – and there’s 30% who never want to come back, and we’re happy with that as long as they are working well. The other 10% don’t really care, but they’re the minority. Early indications are that when staff come in they now appreciate their time more with colleagues, they going out for lunch, or for a drink after work whereas before they wouldn’t have done.”

Time will tell whether this new socialised behaviour continues, or if it’s just a short-term response to coming out of lockdown and making the most of lost freedoms regained. But the pandemic has underscored for many that it was the little things we lost which mattered most. Perhaps habits will change?

I ask Nick why some employers have resisted the work from home model before the pandemic, and why some will want staff back in full time?

“I think a lot of them have invested in space and now don’t want to waste that, but the other side is trust in your team. When your staff are in the office you can see what they’re doing. But the trust has to go both ways, we want to look after our staff and believe in their wellbeing, but in return we expect them to look after the company.”

It’s a fascinating narrative, but is it just a flash in the pan. The Covid tide has swept in, and we wait to see what the business landscape looks like when it goes out again – and that turning of the tide has only just begun. We will need to wait for a few years yet to see exactly how the cards fall for both the office, the office worker, and indeed the many jobs, businesses and sectors that rely on the daily mass movement of millions of people.

So while rumours of the offices’ demise may well have been exaggerated, the patient is no doubt in triage and the results – when we get them – will have ramifications for many businesses.

The Federation of Small Businesses were established over 45 years ago - working to help their members succeed in business. Members receive business services including advice, financial products and support.

FSB is also the UK's leading business campaigner, focused on delivering change that supports smaller businesses to grow and succeed. Their policy and advocacy team in Westminster focuses on UK and English policy issues, with more teams across Glasgow, Cardiff and Belfast.